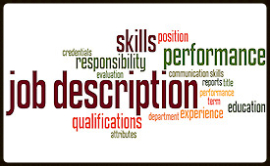 Anglian Intumescent Limited have a Accounts/Administration position available within the company. We are looking for a basic accounts person with knowledge of sage and who is also willing to do general administration work. *This is a full time position consisting of Mon - Thurs 9am - 5pm and Fridays 9am - 4:30pm. * Please Note: A part time contract can also be considered.

You will act as support for the office and duties will include but are not limited to filing, Reception and telephone duties, matching delivery notes to purchase orders, processing customer orders, arranging site meetings for staff, general administration, accounts and ordering office supplies. You will need to be proficient in Microsoft Office & Sage Accounts, a good team player and have good communication skills. You will also be able to chase any late payments in a firm but nice manner as well as doing the general invoicing on sage, conducting Payroll, VAT Returns payments etc and CIS Payments, Completion of prospective new Pre-Qualification Questionnaires inc, health and safety information, insurance details, company policy and procedures.

You should have:
- Strong IT skills including Excel, Word, Publisher, Outlook & Sage
- Excellent communication skills and able to work as part of a team
- Attention to detail especially when working to deadlines
- Ability to multi-task and work accurately
- Excellent telephone manner
- Communicate with telephone and email queries
- Ability to build good working relationships with external suppliers and internal customers
- Knowledge and experience of CIS is an advantage

Please email debbiehull@anglianintumescent.co.uk for more information or if you are interested in this position 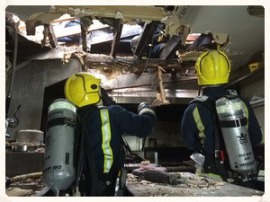 Four fire crews attended a fire at Varsity restaurant in St Andrew's Street, Cambridge yesterday at 12.45pm. The fire started in the kitchen of the restaurant and had spread to the ducting and into the roof. Firefighters had to cut away the roof to get to the fire. Three neighbouring restaurants were evacuated because of smoke and the risk of the fire spreading.

Crews managed to contain the fire and damage was limited to half of the kitchen and the immediate roof area.

One man was treated for smoke inhalation, first by fire crews who administered oxygen, and then by an ambulance crew that attended. He was discharged at the scene.

Watch commander Clive Pettit said: "This was a difficult fire to contain as we had to cut the roof away to get to the ducting where the fire was spreading. It had the potential to spread to the other restaurants but we managed to contain it.

"We were alerted to the fire by a passer-by who rang Cambridge Fire Station. It is important that anyone who comes across a fire dials 999 and not the local fire station.

Crews were back at their station by 3.30pm. The cause of the fire was accidental. 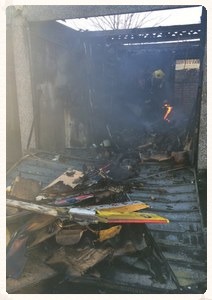 Two crews from St Neots were called to a garage fire in Knights Close, Eaton Socon.

A double garage, which was single storey and contained tools and materials to build model aircraft, was well alight. Four firefighters wearing breathing apparatus used hose reels, jets and hydrants to extinguish the fire by 12.23pm. One male casualty was treated by firefighters at the scene for burns.

Crews returned to their stations by 1pm.

The cause of the fire was accidental, by electrical.

Watch Commander Rob Robinson said: "The garage contained a number of flammable products and a leakage of such gases contributed to the fuelling of the fire, as well as to a small explosion which blew the roof off the garage.

"Residents are reminded to be mindful of the storage of flammable products, especially when leaving them in the same place as charging electrical batteries and other electrical items. Flammable materials should always be stored according to the instructions and electrical items should be checked regularly by a qualified electrician." 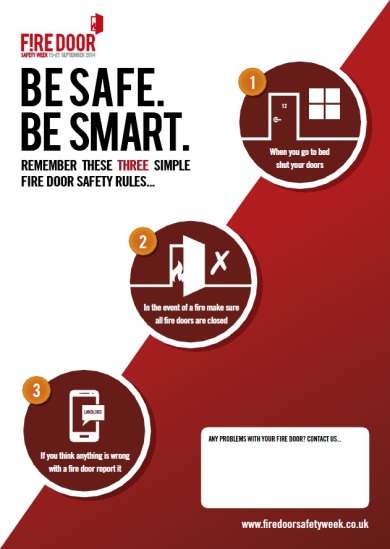 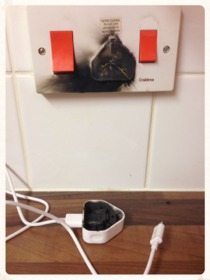 Be careful when charging you mobile phones! This picture is from an incident in Swavesey over the weekend where the phone charger had melted.
Always make sure that you switch off all sockets once your phone is charged and do not leave it charging through out the night. 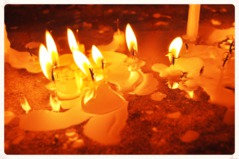 One crew from Dogsthorpe and one crew from Stanground were called to a house fire in Gladstone Street, Peterborough. Two firefighters wearing breathing apparatus used a hose reel to extinguish a fire. They used small gear and cut away at the property to ensure the fire was out.Crews returned to their stations by 6.45pm. The cause of the fire was accidental, believed to have been started by a candle 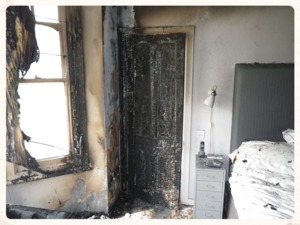 Firefighters are reminding Londoners about the importance of  keeping crystal furnishings out of direct sunlight after a crystal doorknob started a house fire yesterday morning.The sun’s rays refracted light through the door knob and onto a dressing gown hanging from the  door which then caught fire. Fortunately, the house was empty at the time and a smoke alarm alerted builders working on an adjacent house who called the fire brigade. Earlier in the year the Brigade attended an incident in Romford when a crystal ball set light to curtains. Last summer firefighters tackled a fire in Enfield caused by a vanity mirror which also set fire to curtains. Charlie Pugsley from the Brigade’s fire investigation unit said:

“Crystal and glass ornaments and items such as shaving mirrors should be kept out of direct sunlight. The homeowners are lucky they had a working smoke alarm which alerted some local builders who quickly called the Brigade. Part of the bedroom was damaged in the fire but it could have been much worse.“ 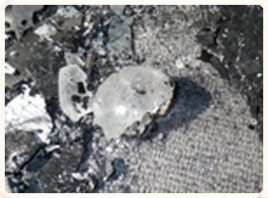 Earlier in the year the Brigade attended an incident in Romford when a crystal ball set light to curtains. Last summer firefighters tackled a fire in Enfield caused by a vanity mirror which also set fire to curtains.

• Fit at least one smoke alarm per floor and test them every week to make sure they work and the batteries are not flat.

• If you have a fire, close the door on the blaze, get out stay out and call the Brigade

We are currently in the process of adding current and completed projects on our projects page, check it out to see what we have been up to.

After a high demand from our customers Anglian Intumescent Ltd are proud to announce that we can now provide our customers with New Fire Doors which are tested to BS476: Part 22: 1987 achieving a total fire resistance up to 30 minutes ( FD30) or 60 Minutes (FD60) when hung and installed in accordance with the instructions provided with the door. All doors are third party certified and where applicable.

Some of our fire doors also comply with Part E which means to help minimise sound travel, providing a peacful and quiet enviroment.

We can also provide doors which provide access and facilities for disabled people, these doors are wider and have a reduced threshold hights which are required by building Regulation Part M (selected sizes only).

Recommend this page on: